Say what now?! Econometrics (by me) in plain English

Hold on a sec! You can now read this and the related blogs in my eBook: 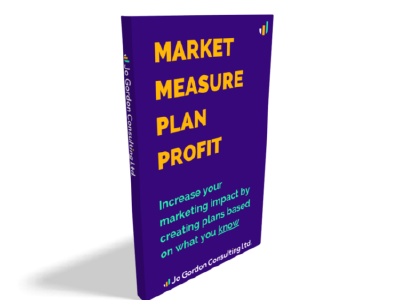 The ‘E’ word was a third of my first degree and has kept a roof over my head and food on the table for twenty years. As I’ve learned, now I’ve left working full time in the industry and started interacting with a broader base of professionals, it’s well … niche. Back in August I wrote my first LinkedIn article (https://www.linkedin.com/pulse/20-years-marketing-mix-modelling-jo-gordon). That was mainly written for people in my industry who work in a similar field.

As I continue to build my network and simply just talk to more people (I don’t live in London anymore so often chat to otherwise-strangers) – I’ve found that I don’t really have a decent explanation of what it is to hand that isn’t a sales spiel from when I was pitching. So, this is for website visitors who have stumbled on my Services page and wanted to know more. Or super-curious inter-webs searchers. Or even friends and family with some time to kill. Apologies to academics disappointed by a lack of jargon ;)

Econometrics literally means economic measurement. Most people can reason that as prices go up the number of people buying a product will go down. If it’s important for you to know by how much sales fall when you raise your prices, that’s where econometrics comes in useful – it can quantify how much and give you a level of certainty about that estimation. You may just choose to chart your sales data instead. There’s nothing wrong with that, but it’s tricky if prices going up is not the only thing going on, and you only have the certainty of your own ‘by eye’ estimate to fall back on.

Let’s imagine you sell ice cream. If you raise your prices at the end of the summer how will you know how much of the sales fall is due to the price rise and how much is due to the natural drop off in business because it’s not so sunny and warm? That’s just two things but in most real-life businesses there are dozens of factors that affect sales at any point in time. Econometrics is a set of statistical techniques that can deal with this complexity. What you end up with is a simplified model of reality to simulate with.

To build that model lots of data is needed – in fact, ideally weekly information going back at least three years for anything that you can list that theoretically affects your sales. Every marketing and promotion activity you or your competitors have done. Every outlet you and your competitors sell from. Sunshine and temperature in the locations you sell. And so on. It’s a daunting and time-consuming process but the great news is that since I started 20 years ago automation for this part has come on tremendously.

I trained using a proprietary piece of modelling software and have worked with a couple of commercial packages too. Today, I also use R, an open source project that contains similar statistical algorithms packages. Modelling is statistics, but to achieve a commercially useful model output, is also an art. If you’re thinking of a black box that you shove the data into, turn a handle and out pops a decent model, think again. Even those sexy machine-learning models need analyst intervention for training …

An accomplished econometrician will have studied in detail all the data going into the model and formed hypotheses about the relative importance of each factor. They will have sense-checked their understanding with experts (the ice cream seller himself.) They will be mindful of qualities the data needs to satisfy to trust the outputs. And they will scrutinize the quality and certainty details that the software provides. The model is probably the product of dozens of iterations and tests. It’s true that there are acceptable techniques to automate some of this, but to remove analysts altogether is risky.

How useful is a backward-looking model of your past three years sales though? Well, it can be confirmatory evidence for what you already knew or believed. Especially if generated by an independent party this can be handy in boardroom budget discussions. Or it may refute a long-held and embedded belief in your business that provides challenging food for thought. Either way, some evidence is generated that gives you a steer on whether to maintain or change. The real power, though, is using the outputs for future quantitative decision-making, but before I do that, I will explain the link between econometrics and marketing mix models, which is what I talked about in my LI article.

Econometrics is an umbrella term for a set of techniques for economic measurement. They pop up in all sorts of disciplines, including media and marketing. Marketing mix models is just the name for econometric models that focus on measuring the relative performance of all the marketing channels a brand uses. Of course, as outlined above, to do this you also need to include all the other factors that affect sales in the model too.

For marketing mix models it’s not only how much activity in a media channel drives sales that can be quantified but also, depending on what has happened in the model period: how quickly the effect builds; how quickly it decays away; if the effect is different by campaign; and how the effect changes in response to more investment. You now have perhaps 5-6 criteria on which to rank and compare each media channel.

Econometric / marketing mix models are simply data driven decision-making tools – if built carefully and applied sensibly. You might expect me to advise, as a practising econometrician, that every business owner should consider investing in this type of analysis. Not true:

If you’re not sure, drop me a line or give me a call and let’s chat. All econometricians worth their salt are also by definition great data analysts too, so there is always something that can be done to inform marketing decisions. In fact, I have worked in a few places where I didn’t touch econometrics at all, but that’s for another time. Alternatively, if you’re really interested in exactly how these statistical models work, I’m also more than happy to give a no-jargon explainer on that too.

econometrics marketing mix modelling marketing effectiveness data driven strategy business planning return on marketing investment
31Aug
Price is What You Pay, Value is What You Get – My 2p Worth
18Apr
Can I help you? Is my offer right for you?
30May
Marketing Mix Modelling: How does it work?
Comments